The causes of the sound of a car Engine knock 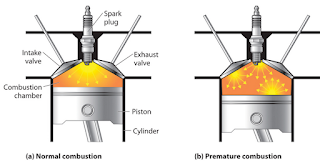 Common causes of Car Engine knock is due to less engine power, the Car Engine knock events usually occur when a machine is being in the gas or are a clear example of acceleration can be should be is run vehicles with start-up using the teeth Gears 3 will certainly sound a typewriter tik…tik or tek…tek…tek  that hard from the machine even though it was a new car.

Back to the title of the article's "causes and how to fix a car Engine knock at the Incline's" car as hard and climb, specifically writing this article I've done test the way what the hell that meant.
After doing a test road is clearly visible when the accelerated rise in the not-too-sharp teeth with 2 direct engine sound tik…tik…tik…tik, in the heart of this might be reasonable because it was climbing and a load of passengers.

But when passing through the road straight with a slight incline at a speed of 40 km/h gear 2 rpm of about 2000rpm, sounding more Car Engine knock sound but after bypassing speed 40 km/h the car engine knocking sound is not heard from again.

Switch to speed 3 gears, when the vehicle is 60 km/h with 3000 rpm, the road is straight with a slight incline, always knocking sound from the engine of a car's engine, but after passing through the speed limit on the same gears doesn't sound the sound of a car engine is knocking. Imagine also how high incline the vehicle can move at speeds of 60 hours.

It is the result of the test Car's Engine knock road crash caused by the supply of gasoline to burn less space due to dirty injectors or injector clogged holes by some crust or dirt from the tank up to the injector.

Because after the injectors cleaned (see how to clean the injectors) and try to do the road test in the same way with plus a load of passengers, not to mention knocking sound good or on the climbs car engine when the speed of 40 km/h on the teeth 2 with 2000 rpm or when speed of 60 km/h 3 teeth with 3000 rpm.

Conclusion:
On the problem of Car Engine knock in this crash was caused by a fuel injector in a fog right into the combustion chamber of the engine volume of her less or fuel mixture lean as a result dirty injectors. Hopefully useful.