Trouble with Battery or Battery Wet


Sometimes, when ages wear short battery, which blame is the quality of the battery.
Whereas it is often precisely because some trivial things that escape the attention.
Here we describe some of the difficulties that are often encountered, The following causes and solutions to address them.

Liquid Battery Decreases A Lot
Causes:
The height of the fluid level checking fails in a long time .A leak in the battery container
Solution:
Recharge battery fluid with water aquades, and don't forget to check it about once a week
Do not attempt patched when leaks. Immediately replace your battery with a new one.

Difficult Start in The Morning
Causes:
- The electrical load is too large
- Electricity in batteries already weak
- The starter system bottlenecks
Solution:
Turn off electric devices suspected of overload. For example, lights, air conditioning or audio devices.
If the electricity in batteries is already weak, try powering the car with driven (transmitting manual).
Run about 30 minutes to allow the alternator battery filling. When still weak, too
Mean cell battery is damaged and must be replaced.

When the Battery on a jumper but still weak to start the engine, most likely the problem is precisely on the starter system. In this case, Please check the car starter system to the workshop, and no need to replace a new battery. 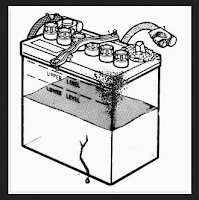 Display Indicator Illuminated Battery
Causes:
Charging system battery is too low.
Solution:
Check the connection cable from the alternator to the battery. If there is a sagging, immediately tighten.
If the problem is not resolved, the damage is likely to occur on the alternator.

Immediately repair or replace alternator.
Light up indicator lights battery is not a harbinger of a weak battery. So replace the battery will not solve this problem.

On a wet battery, there is a hole with a lid that can be opened-close to add water battery. Water can be reduced when accu battery use. This happens because chemical reactions within the battery.
As for the advantages of using a wet battery is able to use the ' vitamins ' accu form tablets sold in accessories or a solution of EDTA, to prolongs the accu. Prices are relatively cheaper than the other types of batteries.

Then use a wet battery losses which are obliged to check the battery water levels regularly, if the battery is under the water level LOW, can damage the cells of the accu. Has the level of Self-Discharge of (0.8-1.0% volume/day).