March 25, 2014
Modern cars go much further in preventing driver fatigue than the cars from years past. Anything the engineers can do to make the car more pleasant to drive is a good thing. One feature that does this very well but that has actually been around for a very long time is cruise control. This feature is not new but it has evolved tremendously and really doesn’t function at all like it used to.

The first cruise control systems used canister with a rubber diaphragm attached to a cable that would hold the throttle open when engine vacuum was applied to one side of the diaphragm. When the driver wanted to increase the set speed a vacuum solenoid would allow more vacuum in to act on the diaphragm. When the driver would hit the brake a valve attached to the brake pedal would let all the vacuum out and the throttle would snap shut.

Since there is a computer controlled actuator working the throttle, the only thing we need now to make cruise control work is a switch that tells the computer to hold the throttle open even when there is no foot on the gas. So the sensor attached to the gas pedal, and the buttons for the cruise control signal the same computer. This is a good example of computers simplifying the systems under the hood. A cruise control actuator and all the associated linkages are no longer needed. 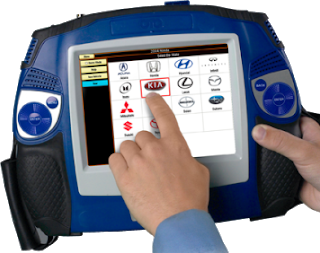 This is not where the evolution of cruise control ends. Many cars are also now equipped with what is known as adaptive cruise control. This will not only hold the vehicle at a set speed but it will also reduce speed as needed to keep from getting too close to the vehicles in front of you that are traveling more slowly. The driver not only sets the cruising speed but they can also set the minimum following distance.

Adaptive cruise control is certainly one of those features that may cause us shake our heads in regards to the many new and somewhat silly features that we find on cars today, but of course this is where we are. In many ways these features that seem silly can actually make the car safer to drive by reducing driver fatigue and distraction. So while it seems that cruise control is the same as it ever was, it turns out it isn’t.