Buying a used car off the lot or even from a private seller is never a comfortable thing for most people. The last thing you want to do is spend a hefty chunk of change on a new ride, and then have to spend a pile more on repairing some kind of hidden, preexisting condition.

One major problem that really does exist is a used car that has been in a flood. A car that has been underwater is a car that could have some very extensive problems. These cars come from places where some kind of natural disaster has occurred that has submerged hundreds or perhaps thousands of cars at once. Hurricanes such as Katrina or Sandy are prime examples of storms that have decimated the automobile population in their respective areas.

Insurance companies pay out millions in claims to compensate the owners of these vehicles. The cars are then sold as totaled vehicles and given special salvage title status. Sometimes in the shuffle of moving this metal away from the scene, the insurance companies sell them to third parties that do everything from scrap them, to fix them and return them to the road. 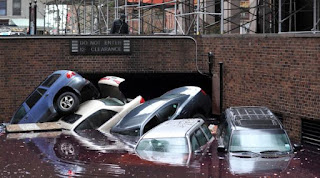 With a flood car the potential for severe damage is huge, and that potential exists for every part or system within the vehicle. If water is in the engine for just a few days it can cause rust which may either result in immediate problems, leading to immediate engine failure, or it may result in premature engine failure over a longer period of time. Just enough time for someone to buy it thinking everything is fine.

Electronic systems are extremely susceptible to flood damage. Every car on the road has so much wiring and so many computer controlled systems that it is impossible for a flood car to escape electrical damage. Corrosion in electrical connectors or computerized control modules is extremely difficult and expensive to repair. Many electronic failures that result from flood damage might not show up for years after the car has been returned to service. You might say that water damage does not necessarily destroy the car right away so much as it causes the car to lose years off of its usable life.

Besides things such as a Carfax report, the way to tell if a car has been in a flood is to look for obvious things that you don’t see on any normal car. Look under the seats at the seat tracks for rust or corrosion. Nothing inside a car should ever show the least sign of rust. Look in the trunk where the spare tire is located for similar rust and corrosion. The spare tire well may end up holding water for several weeks after the flood. Hidden areas underneath carpet or the dash are great places to look for water damage.

Rust on metal parts that are not exposed to the elements is not normal, water damage in the carpets and seats may show as water stains or even signs of mildew might be visible, especially if you live in a place that is humid. Even in very dry places water can stay trapped inside headlight and taillight assemblies forever. Sometimes moisture or condensation will appear behind an instrument cluster lens. Many times if the water does eventually dry out it may leave behind strange residues in places where you should never see them.

Under the hood, take a moment to disconnect some of the electrical connectors that you find. These connectors are weather resistant but they are not exactly water proof. When submerged they will fill up with water and all of the pins will corrode. If you see any scale buildup, or if the pins are anything other than shiny and new looking, then they have been wet.

Some used car dealers will sell flood cars very cheap and they may even inform you that it is a flood car. Do not take a chance on any of these even if they seem to run very well and the dealer assures you they are a great value. The dealer might have honestly checked the vehicle out thoroughly, but there is no way they can see every potential problem, even if they try.


If you find out that your vehicle has been in a flood, be prepared for the worst. This does not mean that the engine is going to blow up and leave stranded on the side of the road, but don’t be surprised if it does. When you get rid of the vehicle do not expect top dollar if you sell it, and you need to disclose the vehicle history to your potential buyers. Just like you they must be made aware, because when they buy that flooded car, they need to know what they are getting into.