Just about any self-respecting car nut will tell you they have a bucket list of places they must visit to pay homage to these silly machines they love. Chances are the list would include places like the Henry Ford Museum, in Dearborn, Michigan, or perhaps attending speed week at the Bonneville Salt Flats of Utah’s west desert. Another amazing place that would have to be on the list would be the Indianapolis Motor Speedway and Hall of Fame Museum in Indianapolis, Indiana. Recently, the car nut that writes this column was able to visit this sacred ground while vacationing with the family. This was a great destination for the family, even my moody teenage daughter had a good time there.
The Brickyard as it is affectionately known was originally built in 1909 by a couple of early car nuts. Why is it that anytime some new technology hits the market, it’s not long before someone decides to see how fast it will go? The track was dirt to begin with but was almost immediately repaved with bricks, 3.2 million bricks to be precise. This is why it is called the brickyard. Over time the bricks were slowly replaced with asphalt until 1961 when the last of the bricks were paved over.
Today the start/finish line is marked with three feet of the original bricks. Since 1996 it has become customary for the winner of any of the races that take place on this circuit to ceremoniously stoop down to kiss the bricks before ascending the winner’s podium. Of course yours truly was not about to be left out. Although I didn't win a race at Indy, I did feel the need to participate in this sacred right while touring the facilities.
This track hosts three big races each year: the Indianapolis 500 of the Indy Car Series, The Brickyard 400 of NASCAR, and the Indianapolis GP of the MotoGP motorcycle racing series. In the past the American Grand Prix of Formula One has also been held there, but that race now happens elsewhere.
Of these big events the one with the most history is of course the Indy 500. Other than a few years during times of world war this event has occurred every year for over 100 years. Because of the history and tradition that surrounds this race; the Indianapolis Motor Speedway has a museum and hall of fame dedicated to the driver’s and their machines that have won this historic race.
The museum houses most of the original winning cars from the last century, all displayed side by side. The evolution of the race cars at Indy is very easy to see as you walk up and down the many aisles. I was told by one of the guides working in the museum that all of the cars still run, and are still just as track worthy as they were on the day when they won the coveted Borg-Warner trophy.
They said the cars are taken out on the track occasionally to burn the cobwebs out of them, and for photo ops. One of the old race cars was on the track a couple of years ago and suffered a major engine failure. No problem, the museum employs mechanics to take care of such things and they were able to get everything repaired, even though they had to custom fabricate a few of the parts that were needed.
When visiting the Indianapolis Motor Speedway you can check out the museum, go for a ride around the track with a tour guide, or you can do the deluxe tour. Obviously the latter is a must for anyone who really wants to see the facilities. This all inclusive tour takes you out on the track where you can get out and wander up and down the main stretch, kiss the bricks, and tour the various media centers and garages.
If you are a truly devoted fan you would come back Memorial Day weekend to be one of the quarter million fans in the stands watching the Indy 500. I suppose that will be the next thing on my list. 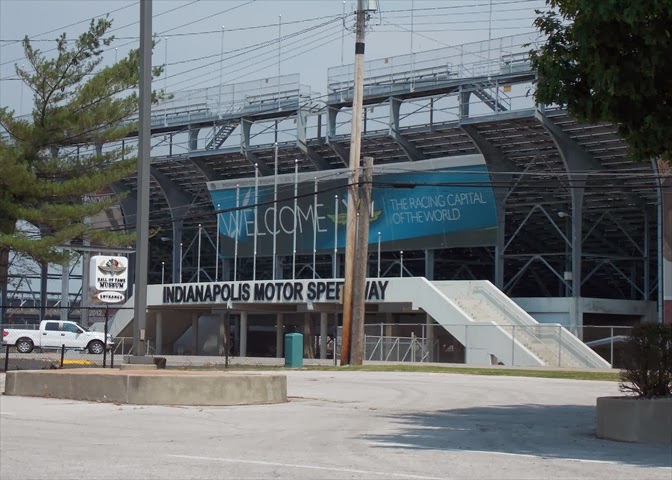