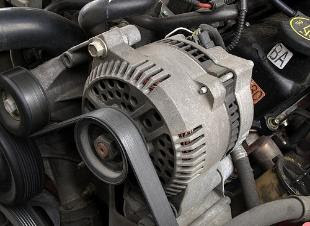 A device that creates electricity and then uses that electricity to create more electricity sounds like a great thing and indeed it would be. The alternator on your can almost do this but not really. Perpetual energy is scientifically impossible, at least with what we currently understand about the laws of thermodynamics.
The alternator is a type of generator so it essentially creates electricity, and to do this it uses electricity, quite often originating in the alternator. The force, or the energy that really makes all of this possible is the rotating force of the engine. The alternator is driven by a belt that is turned using a pulley attached to the crankshaft of the engine. This is the real driving force that makes electrical generation possible within the alternator. The rest is simply a matter of electromagnetic induction.
Electromagnetic induction occurs when a magnetic flux or field passes over a conductor. The point at which the magnetic field collapses around the conductor is the point where voltage is induced into the conductor. This voltage is the pressure that pushes electrons through the conductor, and electron flow is electricity. The alternator actually produces alternating current which is why it’s called an alternator. Before this current actually leaves the alternator it is converted into direct current so the power can be stored in the battery.
In order for this to happen, the alternator has two main parts, the rotor, and the stator. These parts do what their names imply. The rotor rotates or spins and the stator stays in place surrounding the rotor. The rotor contains a large electromagnet that creates the magnetic field necessary for induction. The stator is the conductor that the magnetic field moves through. As the rotor spins, the magnetic field passes through the stator over and over again, thousands of time per minute. The voltage that is induced is then sent to charge the battery and to run all electrical accessories. This electricity even powers the electromagnet in the stator. This may seem like perpetual energy but it’s not even close because the energy to turn the rotor has to come from the engine. The energy to turn the engine of course comes from the gasoline.
Alternator failure is a fairly common problem that most cars will experience at one point or another. When this happens while the vehicle is being driven alternator voltage output goes to zero, or to something very low. Anything electrical on the vehicle will begin to draw power from the battery. This will slowly draw the battery dead until there is not enough voltage to run the fuel pump and fire the spark plugs. The engine then dies. When you try to restart it, the motor won’t even crank because the battery is dead. A jump start can get you going again but only for a few minutes until the car stalls again. 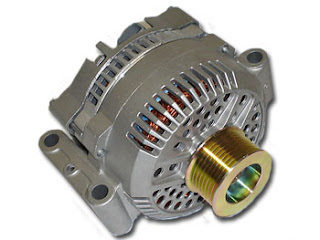 So what can you do the make your alternator last longer? Not much really, it is largely a maintenance free device. Just make sure that the belt is tight and doesn’t squeal. Also, if you run your battery dead because you leave your headlights on or something like that, or if you have a battery that is going bad, this puts considerable strain on the alternator. If you battery goes dead, it is best to recharge the battery with a battery charger rather than just letting the alternator do it. Recharging a dead battery with the alternator once or twice over the life of the car isn’t a big deal, but don’t make it a habit. Be sure to have your battery checked regularly to make sure that it doesn’t slowly go bad and drag the alternator down with it.
Keep these ideas in mind and your own personal power generator will last a long time without much fuss. Perpetual energy it isn’t, but it is essential to the proper operation of your vehicle, not to mention your rear seat DVD player.