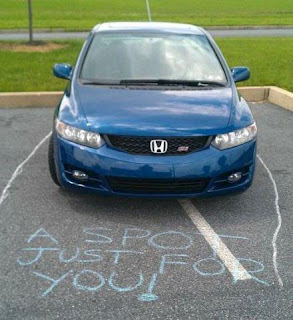 Why is it that when we are behind the wheel of a car we automatically think that nothing we do affects others? In reality driving down a crowded street is no different than walking down a crowded street.
We see many other people as we make our way along with the crowd. When we are walking everything seems to go smoothly. We nod a polite hello to strangers, we give each other space, and we generally interact in a polite manner. This simple interaction almost never leads to blatant offenses between two individuals, because we all know how to behave in these situations.
Put us in a car and we become crazy jerks. We drive around like everyone else is some kind of moron and we are the only ones that have any business being on the road. We become quick to judge, quick to offend, and quick to let our sense of decency and courtesy go out the window. Every offense that we commit against another motorist we quickly brush off as ultimately being someone else’s fault. We try to teach others lessons from behind the wheel that we think they need, when in reality such things are dangerous.
The world would be a better place if we could consider others when using our automobiles. Just because you can’t look the other person in the eye doesn't mean that you shouldn't show them respect and decency. Any action you take while driving your car is ultimately your responsibility.
When you pull into a parking spot, keep the car between the lines. When you don’t, it becomes difficult for others to park in the space next to you. What makes you think that you deserve two parking spots? Maybe you have never even thought about it one way or another. If your vehicle is too big to efficiently pull into a particular parking spot then find another.

If you have to run into a store or quickly make a similar stop, you are still obligated to park in the parking lot. Nobody is allowed to leave their vehicle parked in front of the entrance where people are trying to enter and exit, and cars are trying to maneuver around each other. You are not the exception, even if it’s only for a minute. When you push your shopping cart around the grocery store, would you leave it at the end of an aisle so that it blocks other shoppers?
When driving on the interstate, the slower traffic must keep to the right. If you are driving slower than even one other car on the freeway, and that car wants to pass, you are obligated to move over. The passing car must not pass on the right. This is not a time for you to teach this other driver what the speed limit is and dawdle along slowly in the passing lane. Notice that name, it’s called the “passing lane” because it is for passing. If you were a pedestrian on the sidewalk would you not yield briefly to another who was trying to get around you?
The diesel pickup spewing black smoke from its tailpipe as it accelerates from a stop light is offensive to most other drivers. These toxins waft through the air all around the intersection for others to breathe. This smoke is the result of something that is broken. Either the fuel management on the truck is broken, or the driver themselves is broken.
Nobody is impressed with a diesel blowing smoke between stoplights, except those that do it. Get your truck fixed or run a different program in your engine computer. Most of the time these smoke blowing drivers are running a computer program that makes this occur.
If you want to blow black smoke from your exhaust, sign up for a sled pulling competition. Then you can see some real torque in action and learn how weak your truck really is. Your perceived right to blow smoke doesn't supersede anyone else’s literal right to not breathe your garbage. You wouldn't walk up to someone on the street and blow cigarette smoke right in their face would you?
While this seems like just a negative rant, it isn't  Most of the offences mentioned here are small and they don’t occur because people are genuinely rude, but rather because we as a society don’t consider others as much as we should. If we stop and think about how our actions behind the wheel have an effect on fellow motorists, even those whom we cannot look in the eye, we would all behave more courteously. This of course, would mean that we would all be happier drivers ourselves.