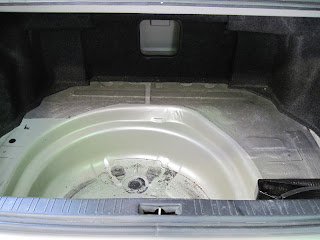 Because life is so crazy I have not had as much time for fun projects. A while back I wrote about the beginning of just such a fun project, the conversion of one of my vehicles to run on natural gas. Recently I have made a bit of progress on the CNG conversion and this happening just in time. Gas prices are going up and will most likely be above $4.00 a gallon where I live sometime this summer. The cost of CNG for vehicles in my town is currently $1.50 per gallon, or GGE. I am happy to report that the new CNG fuel tank is now finally installed.
Several considerations had to be mulled over before I could get the tank installed in the trunk of my 1997 Lexus ES300. One of the issues was related to the fact that the spare tire mounts in the trunk below the floor in a manner that is typical of most sedans. Because of this, a bracket had to be made to span the opening so that the tank straps would have something to bolt to. Fabrication of a bracket is no big deal but since the bracket mounts across the opening there was an issue in being able to remove the spare tire.
The spare tire that came with the car was full sized, and not one of the donut types that are usually the standard. I thought that maybe this was not the original spare that came with the car but it just so happens that I had another Lexus ES300 laying around the shop, and this second car also had a full size spare. After doing some measuring and some checking around I determined that if the spare tire was a donut style then it would fit down in the well, clearing the bracket nicely, and I would be able to take it out as needed.
I also considered building another bracket to mount the spare tire to that would allow it to stand up in the trunk in the part of the well that would not be covered by the tank. Keeping a full size spare is not a bad thing but for as little as the spare tire is needed, I would rather find a donut that will fit the car, and fit down in the well, and save some trunk space. The CNG tank that I am using takes up about one half to two thirds of the trunk as it is. So I went with a simple bracket design to span the spare tire well, and I am going to get a donut type spare tire.
The other thing I did was build a new floor for the trunk. The old spare tire cover that goes on top of the spare and under the carpet like covering on the floor of the trunk had to be rebuilt to suit my needs. The fiberboard floor would have to split along the lines of the support bracket that would span the spare tire well. I also took the carpet like material that came in the trunk out, and cut it to fit around the tank brackets.
The bolt holes for the brackets were drilled right through the floor of the trunk and luckily the spots where the bolts needed to go did not interfere with anything under the car. Things such as the exhaust pipes or the subframe and suspension linkages are all over the place back there but the bolts line up just right so nothing is in the way. I did have to drop the exhaust down out of the way temporarily but once the bolts were installed the exhaust went back in nicely with no interference. The bolt holes also had to be sealed with a silicone sealant because bare metal was exposed when the holes were drilled and water getting into the trunk could also be an issue. With properly applied sealant these things are no problem.
All along I have suspected that the most difficult part of installing the CNG conversion equipment on the vehicle would be designing and fabricating brackets and things to hold the components. The trick is to make it safe and secure, and make it according to safety standards designed for high pressure fuel systems, all the while making it look nice, as if it was meant to be there.
The next part will be building brackets for the high pressure regulator and the injectors. I suspect that this will be even more difficult, but still not as difficult as designing the filler neck location for the CNG. This could be easily done by putting it under the hood of the car but then you would have to pop the hood every time you fuel up with CNG. I don’t like that idea but the only other thing that could be done would involve cutting into the body. This is something that I will be thinking about next. Hopefully it won't take me another six months to get these things done. 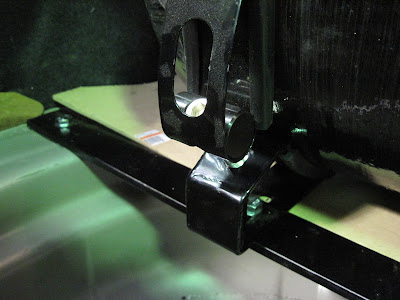