So now the Chevy Volt is catching fire. This is not to say that the Volt is experiencing a dramatic increase in popularity and sales are through the roof because they certainly are not. What I am saying here is that the Volt has gone up in literal flames a few times after being wrecked. So far this seems like a first for hybrids, as cars like the Toyota Prius have been around for 10 years now without much trouble.
At least one incidence has been reported of a Chevrolet Volt catching fire out behind a body shop while it was waiting for some restoration after having been wrecked. A few incidences have also occurred of the Volt catching fire while sitting out behind the facilities of a crash test center. At least one of these fires occurred after the test center wrecked the car and stuck it out back to specifically see if it would catch on fire, according to CNN. The fires seem to be erupting from the high-voltage battery. Every time one of these cars has gone down in a blaze of glory, it was always days or weeks after it was wrecked, and with every car, GM procedures for discharging the battery after it was damaged have not been followed.
The bad PR has caused GM to offer temporary loaner cars to owners of the Volt while an investigation is being conducted by the National Highway Traffic Safety Administration, just in case the owners are freaking out and afraid of getting burned alive. GM of course is down playing everything saying that it’s not that bad since the fires don’t occur until well after the crash.
So what should we make of all of this? I for one am torn a bit with my opinion of the Chevy Volt.  The topic of the Chevy Volt can be rather incendiary (current fire problems not withstanding). I think it is ridiculous that the federal government took control of GM when they filed for bankruptcy back in 2009, and then forced the Volt to market for purely political reasons. The Volt kindles similar feelings amongst many taxpayers. I don’t have a problem with companies doing things for the purposes of being politically correct, or to advance some agenda. A privately held company ought to be able to do whatever they want to do as long as it’s not illegal. The problem is that even today GM is not privately held and the U.S. taxpayer still owns about 25% of the “new” GM.
The Volt was pushed to market with federal tax dollars, and then congress passed legislation awarding $7500 to anyone willing to buy a Volt in order to ignite interest in this new car. MSRP on a new volt is about $42k so with the $7500 incentive (from the developers and builders of the Volt i.e. the Feds) the price people actually end up paying is about $34k. This tax credit for Volt buyers means that tax payers are paying impractical rich people a large chunk of money to buy something that they will use to make a political statement, or they will just use as a toy. This is the real conflagration of the Chevy Volt
Now having said all of this, the part where I am torn is in that I love the technology that is wrapped up in the Volt. I am a technology geek of the highest order and the Volt does have some pretty cool stuff under the hood that makes it go. I have had a chance to inspect a Volt up close and personal, and I even took it for a spin. The car is without a doubt the most impressive thing to ever bear the Chevy bowtie. The ride is great, the handling is nice, and the gas/electric motor combination provides plenty of pep. The Volt beats the Prius in the quarter mile anytime, anywhere. I think that some alternative fuel vehicle is likely to take over at some point anyway, although it will probably not happen overnight. When it does happen it will be gradual and it will be a result of regular market demand, not the result of anyones political agenda. 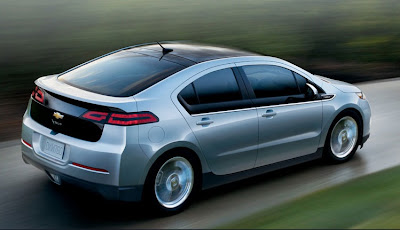 The problem is that the Volt is like the U.S. military. While it is great at what is does, and perhaps it does its job better than anything in its class, when considering the overall cost, it’s obvious that things could be done better for a lot less money. Since the U.S. Constitution calls for the Federal Government to fund the military to protect us all, and since I am pretty sure there is nothing in the document that allows the government to build impractical cars, we can be concerned with G(overnment) M(otors), and we kind of have to learn to live with the military scorching cash.
So what about the fires? On the one hand I would ask what do you expect from a government funded project? On the other hand I would say that it is likely much ado about nothing. Gasoline powered cars catch fire all of the time and we still, after more than a century, keep the highly explosive fuel used to power these cars in plastic or metal tanks that are only inches from the ground as these land missiles cruise about and get into fender fights with other cars. If the Volt fires are a big deal then we will see it all unfold shortly. I think that the media loves fires and explosions so they will try to over inflate this entire issue and we can count on hearing about every battery that is set ablaze.