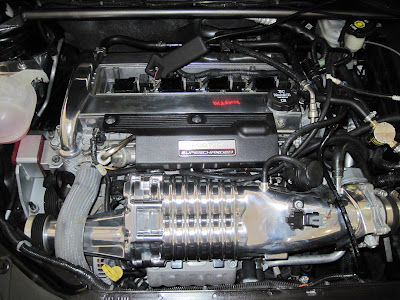 Many things go into the design of an engine. Engineers must consider what kind of vehicle the engine will be used in, and this means everything from, how heavy the car will be, how many people it will haul, how much stuff it will haul, what will the overall volume of the vehicle be, and so on. Usually they will try and apply one engine to as many different vehicle platforms as possible in order to make the money spent on development go farther. This is why the V6 engine found in the Lexus ES350 bears a striking resemblance to the engine found in the Toyota Sienna, or the engine in the Pontiac Solstice seems just like the engine in the Chevy Cobalt.
When engineers adapt the same engine to multiple platforms they often make a few changes to the power plant that make it more suited to the platform. These changes affect the output of the engine because they usually change one of three efficiencies that ultimately determine how that engine will perform. These efficiencies are volumetric efficiency, mechanical efficiency, and thermal efficiency. These three efficiencies will be explained in time but for now let’s start with what might be the easiest to understand, and that would be mechanical efficiency.
Mechanical efficiency refers to how much energy the engine wastes because of the internal friction that is ever present. This friction loss is constant over the entire operating range of the engine. Metal parts rubbing together are going to cause friction that will of course cause resistance to the engine turning. Energy of course cannot be created nor destroyed; it can only be changed into something else. That something else in this case is heat. Anytime energy is lost to inefficiency in anything mechanical it is usually lost as heat. This heat from friction inside the engine is not the thing that makes the engine get as hot as it does, most of that heat comes from another source that we will discuss later.
In order to make the engine more mechanically efficient, friction must be reduced. Not only does reducing friction make the engine more efficient, it also makes the engine last much longer because friction and heat destroy all things mechanical. Obviously, the one thing that reduces friction inside the engine more than anything else is plain old motor oil. Everyone knows that without oil the engine would not last long and would seize up into one hot flaming chunk of cast iron and aluminum. Of course many people will still blow their engines up because they will forget to check the oil or something like that, even though they should know better. In the old days the oil was just about the only thing used to reduce friction and increase mechanical efficiency.
Another thing that has been used to reduce friction on modern engines is more efficient valve train designs. The valve train begins with the camshaft. This shaft uses teardrop shaped lobes that spin on the shaft to push on some kind of a follower, or rod, or lifter, in order to open a valve. The valves allow the air into the cylinder, and let the exhaust out. On older less efficient engines the valve train was actually more complex and used more moving parts to transmit this force from the cam lobes to the valve itself. Every time another device is added for transmitting force, friction will be present.
Most manufacturers use what is called an “overhead cam” design in the valve trains of their engines. This places the camshaft, or camshafts, on top of or right next to the valves, instead of being in an area down near the crankshaft, alongside the cylinders. Placing the camshaft above the valves means the force travels a shorter distant from the cam to the valves, so less energy is lost to friction. Not all modern engines use this design, but most do and the few left out there that don’t, are likely holding on to the old designs because of the expense associated with R&D of new engine architecture. The overhead cam design also helps to increase volumetric efficiency which we will discuss later.
The mechanical efficiency is further increased by using rollers against the cam instead of just a regular lifter or rocker, which pretty much rubs against the cam. Rollers of course, roll instead of rub, and the rollers can use tiny roller bearings within themselves to eliminate friction even more. These rollers can be used on any kind of engine no matter where the camshaft is located.
Modern engines employ many more things to further reduce friction and increase mechanical efficiency. Manufacturing and machining processes have gone a long way to reduce friction. More exact tolerances within the engine help oil to work more effectively. Parts that fit together the way they should will not bind in a way that increases friction, but will fit together well enough to not be constantly pounding each other apart.
While not always internal to the engine, better design of engine accessories and things that are driven by belts from the engine help to increase the mechanical efficiency. Many of the accessories on the engine that used to be belt driven are being eliminated by the use of more electrical and electronic devices. Smog pumps have disappeared, power steering pumps are being eliminated, and even A/C compressors on some vehicles are no longer driven directly by a belt or by the engine. All of this relates to improved mechanical efficiency. If you aren’t using power to power your peripherals under the hood, then that means there will be more power going to the wheels.
Next time we will discuss thermal efficiency.