What Does Octane Mean?

87, 89, 91. If you live in the Rocky Mountain region then you will see 85, 87, and 91. These are your choices when you pull up to the gas pump. These are the various octane ratings of the fuel that the gas station is selling, and as far as most people are concerned the only difference between any of them is typically $.10 per gallon. The truth is there are more important differences besides the price but it has nothing to do with the quality of the fuel, or the amount of power the fuel will produce.

The octane rating refers to ability of the fuel to resist combustion until the spark is introduced into the combustion chamber. You might also say that it is somewhat of a reflection of how much octane is blended with how much heptane to produce the fuel. In order to understand the difference between octane and heptane we should have a brief look at hydrocarbon chains. A hydrocarbon is a molecule that is made up of hydrogen and carbon.
The first of all the hydrocarbon chains, or molecules, is CH4, otherwise known as methane. This is the fuel that is used to heat houses and other buildings along with running your gas stove. Methane is made from a single carbon atom surrounded by 4 hydrogen atoms. After methane comes ethane, C2H6, then propane, C3H8, then butane, C4H10, then pentane, hexane, heptane, and octane.

With each successive hydrocarbon an extra carbon is added along with two more hydrogens. The small hydrocarbons are in a gaseous form at room temperature and at a normal atmospheric pressure. Starting with pentane they become liquid at room temperature but they are very volatile and vaporize quickly. As the molecules get bigger they are still liquid but they loose their volatility and do not evaporate. For example, diesel fuel is usually made up of hydrocarbon chains somewhere in the neighborhood of C14H36. If you spill a bit of gasoline it evaporates quickly, but if you spill a bit of diesel fuel it will sit there until you wipe it up. C48H98 and other similar molecules that are very long are actually polymer chains more commonly known as plastic. This obviously, will not evaporate either.
So getting back to heptane, and octane, and the numbers on the gas pump. Heptane is cheaper than octane, but octane is better at resisting detonation. Detonation, also known as knocking or pinging, and related to pre-ignition, is a condition where the air/fuel mixture burns before the spark is introduced. This happens when something causes an excessive build up of heat in the combustion chamber and that heat lights off the fuel before the spark gets there. When this happens, the piston is not in the proper position to turn the force of the rapidly expanding air, into movement of the crankshaft. Imagine a piston moving upward in the cylinder with great force and then being pushed back against itself violently by this sudden explosion. This leads to severe engine damage if it happens too much. With normal combustion, the piston is on its way down when the fuel burns, it must not be still moving up.
The greater the percentage of octane in the fuel the more it resists detonation. The number 91 on the gas pump means that the fuel from that pump has the same ability to resist detonation as a fuel blend made up of 91% octane and 9% heptane. The blend may not actually be 91% octane but the fuel behaves as if it were. Many things can be added to the fuel to increase the octane rating.
Back in the old days they used to put something in the fuel known as tetra ethyl lead (TEL) to increase the octane rating. This was back in the day when you had Regular, Unleaded, and Premium as your choices at the pump. The one called Regular is the one with the lead. Eventually we decided that it’s not a good idea to pump lead into the air so TEL was no longer used. After that we tried another compound called methyl tertiary butyl ether (MTBE) but this became controversial because it was found to be poisoning ground water.
The most common thing added to fuel today to increase the octane rating is ethanol. Fuel can be blended with up to 10% ethanol by law. Anymore ethanol than that and there is a risk of damaging fuel system components because ethanol is very corrosive. Many people oppose ethanol in the gasoline but at only 10% there are more benefits than detriments. Besides being an inexpensive octane booster, ethanol, being an alcohol molecule, has an oxygen atom in the mix. This makes ethanol an oxygenate, which provides extra oxygen at the point of combustion which in turn helps the air/fuel mixture to burn more cleanly.
Looking at the label on the pump that shows the octane rating this formula is always visible, (R+M)/2. Those with any level of mathleticism will easily see that this is a formula for a simple average of two numbers. R stands for RON, or research octane number, and M stands for MON, or motor octane number. These numbers are the results of the fuel being tested in two different ways. The research octane number is derived from calculations performed, based the blend of the fuel and how it should perform in theory. The motor octane number is derived from actually testing the fuel by using it to power a test engine. Ignition timing on the test engine is advanced until the engine begins the show detonation. The amount of advance that was applied will correspond with an octane rating that becomes the MON. The RON and MON get averaged out and you end up with the number on the pump. 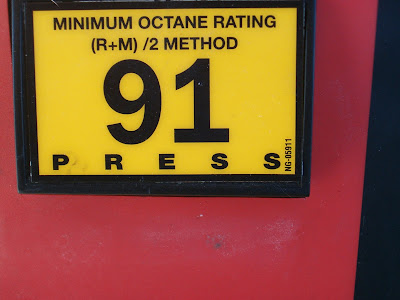 The octane rating of the fuel is all about the ability of the fuel to resist combustion until the spark is introduced into the cylinder and nothing more. This number has nothing to do with the quality of the fuel. Nothing to do with the amount of power the fuel produces. Nothing to do with how clean the fuel is. Nothing to do with the amount of detergents in the fuel. Nothing to do with helping your engine or fuel system components last longer. In a round about way you might say that it could affect some of these things, but not directly, and not in most cars.
Cars that call for higher octane fuel are usually performance cars of some kind or another. These high output engines are built differently and tuned differently so they require fuel that will resist detonation. Things such as a higher compression ratio make for higher combustion chamber temperatures pre-spark. This higher temperature will light off a lower octane fuel. These engines also like to run with more timing advance which can cause the air/fuel mixture to burn too quickly leading to detonation.
If a lower octane fuel is used in an engine that requires a higher octane rating the least that will occur is less power output and lower efficiency (this is not because there is less power in lower octane fuel but because the engine will not run properly), and the worst that will occur is major engine damage. All new vehicles have the ability to limit detonation but only up to a point and only under some circumstances. 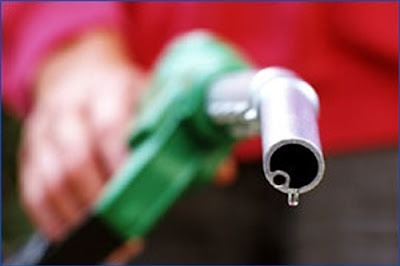 High octane fuel used in a car that doesn’t require it is simply a waste of money. No benefit can come from using a high octane fuel when it isn’t needed. Many people think it’s good because it costs more but this just isn’t true. Obviously high octane fuel doesn’t hurt the engine; it just hurts your wallet. The other condition that makes high octane fuel a waste is high elevation. At high elevation, anything over 4,000 ft. or so, atmospheric pressure is much lower than it is at sea level, and therefore oxygen density is also lower. Since atmospheric pressure is responsible for pushing air into a running engine, there will not be as much oxygen pushed in when the atmospheric pressure is lower such as it is at high elevations. This lower oxygen level, and lower pressure, in the combustion chamber automatically reduces the chance for detonation. This is why the lowest octane rating at stations in the mountain west, cities such as Denver or Salt Lake City, is 85 instead of 87 like it is at sea level.
If you live at sea level, go with the octane rating listed in your owner’s manual. If you live at a high elevation go with something lower. If you are not sure if it’s affecting the way your engine runs, try tracking you fuel economy, because any inefficiency in the way the engine runs will be manifested in the form of lower fuel economy. Don’t just put high octane fuel in your vehicle because it feels good to spend more. People could accuse you of working for the government.