The Worst Cars in the World

August 28, 2011
Second installment in the ongoing series
Dodge/Plymouth Neon
The Neon was seen as something fresh and new, and represented a new direction for Chrysler in the early 90’s. They were finally weeding out all of the terrible K car derivatives from the 80’s and the Neon was poised to be something to challenge the compacts from Japan that had taken over the market. This was not to be because the Neon was such a terrible car.

This car really represented a step forward for Chrysler because on paper, it had all of the same things that the Japanese rivals had, but it also had some great things that the Japanese didn’t have, such as more power, and a supposed fun-to-drive factor. These were things that would draw people over from all of Chrysler’s rivals. The Neon also made domestic offerings from the same class such as the Escort and the Cavalier, look like the Pinto and the Chevette, or any of the other old bombs from the days of the AMC Gremlin.
While Neon sales were pretty good for the first few years, it didn’t take long for the auto buying public to realize that the Neon was not really much better than the old nasty K cars that it was replacing. The people who buy cars like the Japanese cars that the Neon was supposed to compete against, don’t care about a car that says “Hi” (remember the early Neon ad campaigns), and they don’t particularly care about which car has the most horsepower. They want a car that is solid to drive and requires no repairs, and very little maintenance. As it turned out the neon didn’t meet either one of these criteria, and as such the people buying cars from Honda, Toyota, and Nissan didn’t turnout. 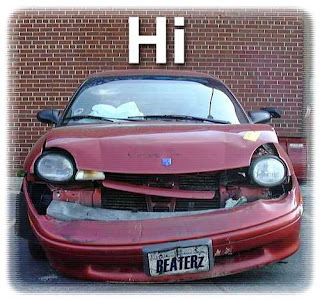 It’s one thing to say that the Neon is bad because it seems like the check engine light is always on, but if you consider that nearly every single Neon ever sold is going to have to have the head gasket replaced at some point, it’s easy to see just how bad they are. 10 years ago during the heyday of the Neon, technicians at Chrysler, Dodge, and Plymouth dealers could literally spend all day replacing head gaskets, and boy did those people make a ton of money doing so! This is a major repair, and something that cannot be ignored. Most of the time the head gasket would leak more oil than the Exxon Valdez. If Dodge had come up with a good way to repair them and have the repair last then you might let this one mistake slide, but it was very common for a Neon to have to have the head gasket replaced more than once for this same problem.

Speaking of ignoring repairs, Neon owners get used to the Check Engine light coming on and shutting off randomly, so much so that they actually convince themselves that this just normal and it doesn’t mean anything, nor is there anything that can be done about it. They are correct in a way, for a Neon, it is normal because there is always something broken or in the process of breaking. The check engine light is just an indicator that if it’s not one thing falling apart, it’s another.
Of course this is not all, the transmissions in the Neons also have a tendency to slip or to jerk or to do anything other than shift smoothly. The lucky neon owners are the few that have a Neon with a stick instead of an automatic. These junky little gear boxes are the biggest part of the car that didn’t change much from the dark days of the K cars. The Neons were not alone in this as many of the Chrysler and Dodge models from around that time period suffered from bad transmissions as well. I would say that 80% of people who have owned a Chrysler or Dodge minivan from the 80’s or 90’s, have probably had to put a transmission (or two) in the thing at some point.
Then there is the interior. They were so cheap and junky that none of the parts fit together or stayed together. The cars all came equipped with a stereo which was needed so you could turn up the music and drown out all of the squeaks and rattles. Because the Neon is an entry level car people think that this poor quality in the interior is okay or normal. Just because a car is inexpensive doesn’t mean that it’s okay for it to fall apart. Young people who are hard on their cars often end up driving these things and their lack of proper care for the vehicle only makes the interior that much worse.

The Neon was first released in 1994. Do you ever see any of these old Neons on the road anymore? Not really, probably because they have all died. This is always a good test for giving you a general idea about whether a car is good or not. The original Neons sold very well but they are a rare sight on today’s roads. Like so many other cars from the struggling big three, the Neon was a hit and great step in the right direction, but as soon as sales begin to slump, the company just abandons the model altogether rather than continue to develop it in a manner that would hold interest and maintain sales. I could name 50 cars that have suffered the same fate. They might make a few token changes to the exterior but it requires more than this to regain the interest of the buying public. The neon had two minor updates before it was discontinued in 2005, and honestly many of the early problems were remedied in some form or another. These efforts were all a day late and a dollar short. The Neon will forever be remembered as a terrible car, and those who say otherwise usually just don’t understand.