May 22, 2011
If it starts to look like a Christmas tree, you could have problems 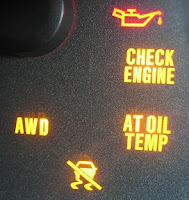 On just about every vehicle out there, the moment you first turn the key on, but before you actually crank the engine, a multitude of lights will light up the instrument cluster like a Christmas tree. As soon as the engine cranks and starts many of the lights shut off right away and the rest will shut off within a few seconds. If one of these lights stays on then you may have a problem. Knowing what the problem is and how severe the problem might be is a task left to professionals, but if you know what each one of these lights refers too, and you understand the various ways in which they may illuminate, then it will help you to know if you can ignore it for a day or two until you have a chance to take it into the shop, or if it means that you must pull over right away before you do major damage to some system on the vehicle.
Sometimes these lights are called “dummy lights” this name comes from the idea that when the light comes on it is almost as if it is saying, “you’ve got a problem dummy, pull over now.” Knowing each MIL (malfunction indicator lamp) that applies to your vehicle really is a must.
Check Engine Light
This light really doesn’t have much to do with the engine itself and has more to do with the engine control systems and the emissions control systems. Sometimes the light might say “service engine soon” or sometimes it might just be an outline of an engine and not have any words around the light at all. Getting rid of words is something that has become more common recently in vehicle controls and instrumentation because it means that the light can be understood regardless of the language of the driver.

When the Check Engine MIL illuminates it means that a failure in the engine controls, or the emissions controls, has occurred that will cause an increase in the emissions from the vehicle. This is bad for obvious reasons, but even if you don’t really care about the emissions from your vehicle, it also usually means that the vehicle is less efficient and you may also notice a loss of power or reduced fuel economy.
When the light illuminates the computer that controls the engine will also store a diagnostic trouble code that relates to the failure. This code can be read from the computer using a special scan tool the will communicate with the computer to extract all sorts of information related to the code and the failure. This code is a clue for the technician to use to determine where the exact failure has occurred. Some people are under the impression that the technician can hook up the car to some kind of magical machine, and the machine will tell them everything that’s wrong. This is not true. The scan tool provides clues, but it takes a good diagnostician to piece the clues together. This is why it costs so much money just to have a technician read the codes and do a bit of diagnostic work. If you ever go to a repair shop or any other place, e.g. parts store, quick lube, and the like, and they say that they will tell you why the light is on for free, remember that you get what you pay for. If they really aren’t going to charge you to hook up their scan tool then they really aren’t going to give you much useful information. In the case of parts store, they will be more than happy to sell you a part on the off chance that it might fix the vehicle. Of course if you go and put that part on your car and it doesn’t fix it, don’t count on the parts store refunding your money for the part.
If the check engine light comes on it almost never means that the vehicle must be pulled over to the side of the road immediately, it usually means that the system ought to be checked out as soon as possible. If the light comes on but the vehicle seems to be running just fine then there is no big hurry to take any action. Just make sure to schedule an appointment with your mechanic as soon as possible. If the MIL comes on and you notice a difference in the way the car is running such as, a loss of power, stumble or hesitation, vibration or excessive noise, then the situation is more urgent. Drive the car home or to the shop as soon as you can and don’t drive it anywhere else. 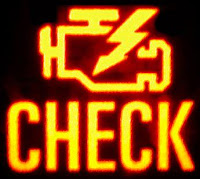 Because this is a computer controlled system like everything else on the car, it is capable of monitoring its own systems and alerting the driver if a problem is found. Once again the computer stores a trouble code that indicates what might be going on with the system. Other systems such as traction control and anti-skid control are very much related to the ABS system. These two systems might have their own MILs that may illuminate together with the ABS light if there is a failure that affects the operation of any or all of these systems. If any of these lights are on it might also mean that the corresponding system will not work, or might not work very well. Most of the time, the brake warning indicator comes on with the ABS light.
SRS Light
The Supplemental Restraint System usually refers to the airbags on the vehicle but with modern restraint systems it could also refer to the seats or the seat belts since they have passive restraint systems integrated into them as well. The SRS light might say SRS, Restraints, or have a picture of an airbag inflated in front of the figure of a person sitting in the car seat. Computer controlled system, trouble code, airbag might not work, you can see a pattern forming here. The SRS system runs a system check every time the key is turned on. The light will stay on during the check and will shut off if no problems are found. This light might not shut off for 5 to 10 seconds after the vehicle is started. Some SRS lights will blink for several seconds during the check and if a problem is found could continue to blink for a minute or two and then stay on permanently.

Coolant Light
Used on vehicles that lack a temperature gauge. The light comes on when the engine temperature gets too hot. Engine should be shut off to prevent damage to internals. Some vehicles have a coolant level light. This might look similar but indicates low coolant in the radiator or the coolant expansion tank.
Maintenance Required Light
Sometimes this will be indicated with words, sometimes it will be indicated with a small wrench symbol. This is a light that comes on to indicate an interval of mileage or time, and indicates that some kind of vehicle service is required. This light can usually be reset without any special tool, but the procedure might not be listed in the owner’s manual. Some vehicles have a maintenance light that says “Service Vehicle Soon,” this should not be confused with the Service Engine Soon light that was mentioned above.
Other Lights
Many other lights can be found on many different types of vehicles. If you are not sure what lights your vehicle has or what those lights mean, check your owner’s manual. The last thing you want on a road trip is an unknown light coming on. You won’t know what it means and you won’t know whether you can continue on your way, or stay put until you get it fixed. No matter what, never forget that lights mean things. Anytime you see one there is a reason that it came on.