May 01, 2011
What color do you need to stay cool?
Green used to be the standard. Then orange became a common color for some cars. Yellow is now very common, but other colors like blue, purple, red, and pink? All of these colors are now common enough among the various makes driving around the streets today. These are the colors of the different coolants in the radiators of modern automobiles. What happened to green and what is the meaning of all of these new colors?
Coolant, or anti-freeze as it is also called, is the fluid that is found in the engine cooling system of every vehicle that is liquid cooled. The majority of engine coolants are made from a chemical known as ethylene glycol. This chemical is mixed with water in order to make the coolant that is found in the engine. Ethylene glycol is used because it does a few different things to benefit the cooling system.
The first thing it does is raise the boiling point of the coolant mixture. The engine typically runs somewhere between 190° and 220° f. Water boils at 212° so something must be added to water to increase the boiling point. If coolant were to boil, it would lead to pockets of air in the coolant which could not be compressed by the water pump. Excess heat in the engine could not be removed, and the engine would get so hot it would melt down into one solid lump of metal alloy (not really but it might as well). These pockets of gas also lead to a highly damaging form of corrosion known as cavitation. The cooling system will also operate under pressure which further increases the boiling point and prevents the formation of vapor bubbles in the system. This is the coolant part of coolant.
Ethylene glycol will also lower the freezing point of the coolant mixture. If the coolant freezes then it will not flow once the engine is started and the engine will then overheat. If the coolant freezes inside of the engine it may also lead to engine damage because of the expansion that occurs when water freezes. This is the antifreeze part of antifreeze.
The last thing that ethylene glycol does is protect the differing metals that are used to construct the engine. Some engines might have a block made from cast iron, cylinder heads made from aluminum, with steel bolts holding them all together. Such a combination of dissimilar metals, and with a fluid flowing between these metals, the conditions are right for the fluid to become very acidic. This would lead to corrosion of everything that the coolant touches. The coolant also protects any of the metal parts that contain iron from rusting.
So the coolant mixture can resist boiling at temperatures up to about 260°, it can resist freezing all the way down to about -40°, and it can avoid becoming overly acidic. This is a lot for the coolant to handle, but with a good mixture of 50% ethylene glycol and 50% water the coolant will be up to the task. 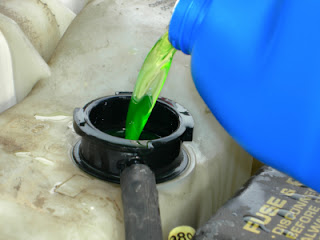 Like every other fluid in a car, the coolant will break down over time. The typical service interval for the regular old green coolant is about every two years or 30,000 miles. Automotive engineers are constantly working on ways to reduce the need for service of the vehicles that they design and build. For the newest cars a newer formulation of ethylene glycol is used in the coolant mixture. This new coolant is referred to as extended life coolant. The service interval for extended life coolant is about 5 years or 100,000 miles.
The problem with all of the different colors is due to every manufacturer coming out with their own version of extended life coolant. General Motors was the first company to make wide use of extended life coolant beginning back in the mid 90’s. The GM extended life coolant is referred to as Dex-cool, and is usually orange. When GM released Dex-cool onto the market they made it clear that only Dex-cool should be used in their vehicles. In subsequent years other manufacturers have come out with their own formulations of extended life coolant and each formulation has been given a different color to make owners and technicians more likely to stick with the factory coolant formulation when servicing their cars.
Extended life coolants work well with one exception, the GM formula Dex-cool. Vehicles that use this formula have a tendency to suffer from major corrosion in the cooling system in as little as 3 or 4 years. The cooling systems on GM vehicles have been known to fill up with a thick, sticky, brownish-orange goo. A nation wide class action lawsuit was filed against General Motors, by owners of GM vehicles because this problem has been so pervasive. Nobody seems to know for sure what is going on with Dex-cool but GM is standing by this product and they continue to use it.
My personal opinion is that Dex-cool is terrible stuff. As an automotive technician I have seen many cooling system failures and engine failures on just about every kind of car out there. I have personally seen GM vehicles with only 40k miles and a cooling system plugged up with this nasty mud-like slime, and Dex-cool that now looks like rusty water. GM says that the problem stems from a radiator cap that doesn’t seal properly, and allows air to get into the system. Whether this is true or not is irrelevant because I have seen many vehicles that have compromised cooling systems in some way that allow air in, and they never suffer the same fate as these Dex-cool filled engines. GM should acknowledge that if their coolant can’t stand up to a bit of exposure to regular plain old air then it is no good. If I had a GM vehicle with Dex-cool in it I would get the cooling system flushed and replace the coolant with regular green coolant or with a good after-market universal coolant. 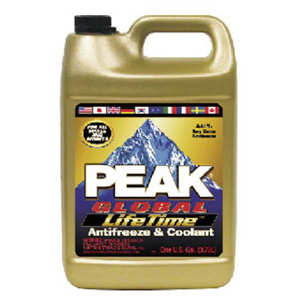 So what do you do about the various color coolants? The short answer is, don’t worry about it. When you are servicing your cooling system it is perfectly okay to use a good after-market universal type coolant. Companies such as Prestone and Peak, manufacture products that can be mixed with any of the colors without any harmful effects on the engine. The fact of the matter is that even if you mix the old green stuff with the extended-life coolant, your engine will not be harmed in any way. The worst that will happen in such a situation is that the extended-life coolant that is in your system is no longer extend-life anymore and the system will have to be serviced after two years instead of five. 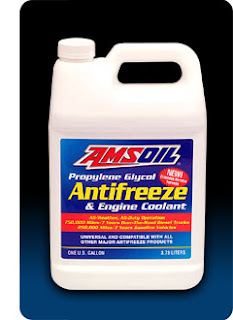 Another alternative to regular ethylene glycol based coolant is propylene glycol coolant. Propylene glycol has many of the same properties as ethylene glycol but it is far less toxic. The reason that this really matters is due to the fact that ethylene glycol has a very sweet taste that attracts the attention of animals. If your vehicle has a coolant leak your cat might notice and drink some of the coolant off of the garage floor. This will obviously kill the animal. Also, considering all of the toxic chemicals that we surround ourselves with, it may be good to eliminate at least one from our daily use. Most manufacturers do not condone the use of propylene glycol based coolants in their vehicles, but the owner of the vehicle has the option to use it if the benefits of its use are important to them.
Stick to the owner’s manual when it comes to servicing all the fluids on your vehicle and you will never go wrong. Service interval is the most important thing when servicing the cooling system, fluid used for the service is less important. Learn how to check your own coolant level so you can perform a routine check. The more you know about maintaining your vehicle, including the cooling system, the better off you and your car will be.