April 06, 2011
Back in the old days the instrument cluster on the average vehicle was much easier to understand. The main reason for this is that cars were simpler. You might instead say that back in the old days cars weren't very smart. Today cars are both more complicated and much more intelligent. Gauges are no longer displaying a value based on a sending unit attached to the gauge. All gauges are now computer controlled and the computer receives the info that it commands the gauge to display from all sorts of different places. Not very many people really understand what all of the needles and scales refer to when they go sweeping back and forth. Some might have an idea but they don’t really understand all of the implications of each gauge.
Most likely the speedometer and the fuel gauge require no explanation. There was a brief period when a few manufacturers got rid of all gauges except these two because they figured that nobody cared about the others. The thinking was that lights could be used to alert the driver if a major problem was imminent but it wouldn’t show the driver how bad, it would just turn on a light. Perhaps this is true for some drivers but not for all so most cars and trucks again have more than just these two.
If your car dies and will not restart, take a glance at the fuel gauge. If the needle is pointing to the E, go ahead and put some gas in the car before you have it towed to the shop for repairs. More than once a distraught car owner had their car towed into the shop as a no start and it was just out of gas. Even if the gauge is not all the way on the E, it might still be out of gas because none of the gauges in the instrument cluster are totally accurate all of the time. Speedometers are usually only accurate within a few miles per hour, and the faster the vehicle is traveling to more inaccurate the speedometer may become. Some speedometers will show a top speed on the scale of something that is really unrealistic. The highest number on the speedometer has nothing to do with the vehicles top speed.
The tachometer is the gauge that tells you how fast the engine is turning. At idle the gauge will usually read around 600 or 700 revolutions per minute (RPM), and when driving down the road it will read whatever speed the engine is turning. Towards the top of the scale there may be an area that is colored red. The area of the scale where this red coloring starts is referred to as the engine “red line”. The red line is where the engine is turning too fast for its own good and may suffer some kind of damage if it remains at red line for too long. Usually there is never any reason to run an engine so fast because by the time it reaches red line it’s no longer producing any more power, and the vehicle won’t usually continue to accelerate, unless the transmission can shift into a higher gear and the RPMs drop back down into the range where torque can be further multiplied. Generally speaking, when driving the vehicle, the lower you keep the RPMs the better fuel economy you will have, as long as you don’t let them get too low.
A coolant temperature gauge is found on almost all vehicles. This gauge tells the driver how hot the engine is. Many times, this gauge will not have any numbers or delineations of any kind, or it may just have a C at one end and an H at the other. Whether it has numbers on it or not, the driver of the vehicle should remember where the needle usually sits because if the needle moves up it means the engine is getting hotter. Running an engine too hot will cause serious damage. Many temperature gauges will have an area near the top of the scale that is red. Never let the needle get into the red, and if you can help it never let the needle get anywhere near the red. Pull over and watch the gauge with the engine idling. If the gauge continues to climb shut the engine off and let it cool down. Just for reference, and incase your gauge does have numbers on it, the engine temperature should be between 190° and 200°. If it gets as hot as 220° that can still be acceptable. If it gets above 230° it would be time to get nervous. If the gauge needle hardly moves off of the lowest point even after the vehicle has been running for some time, there might be a problem with over cooling. This can cause a lack of power and poor fuel economy. Ideally the temp gauge should never move once the engine is warmed up. 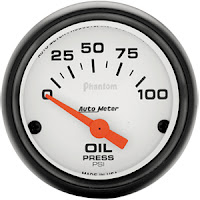 The oil pressure gauge is one that is commonly found on trucks and performance cars. This shows the oil pressure on the main oil galleries deep inside the engine. Oil pressure must always remain at a level that will allow the crankshaft to be properly lubricated in its bearings. This gauge usually just has a normal range in which it should operate. The rule of thumb for oil pressure is a minimum of 10 psi for every 1000 RPM. When the engine is cold the pressure will always be at the high end of normal. Once the engine gets hot the pressure will be high when the engine is running at high RPM and low when the engine is running more slowly, but it should always stay in the normal range. If oil pressure drops too low engine damage will occur, especially if the oil pressure drops low while the engine is turning quickly or under a heavy load. If all oil pressure is lost pull over immediately and turn the engine off.
The last gauge that is common is the volt gauge or battery gauge. This gauge displays what the voltage is in the electrical system with the engine off, and with the engine running. The scale will usually just show a “normal” range rather than numbers. Regular electrical system voltage when the engine is running is anywhere between 13.5 to 14.5 volts. The needle should usually stay in the normal range but will usually be lower when at idle and will go up when the engine accelerates. Movements of the needle should not be too drastic however. If the gauge falls considerably when the engine is running this can be a problem and could eventually cause the engine to stall. If electrical system voltage falls too low then there is not enough electricity to run the fuel pump.
Old cars and trucks had an ammeter instead of a voltmeter. Because of the way the ammeter functions it’s easier to hook up a voltmeter on modern cars. Both gauges give an idea as to how the alternator is functioning, and whether or not it is charging the battery and providing power for all of the electrical systems while the engine is running, but the voltmeter will even work when the engine is not running. When the key is first turned on the voltmeter still shows how much voltage is in the electrical system but it only showing voltage from the battery and not from the alternator. A fully charged car battery should have 12.6 volts, but with the battery installed in the vehicle and the key turned on, the battery ought to have somewhere between 11 and 12 volts.
Some other gauges that you might find on a vehicle would be an engine oil temperature gauge. This is another way of monitoring engine temperature. A transmission temperature gauge is somewhat common. This is to show how hot the transmission is, and is usually found on things like big pickup trucks that may do a lot of towing. Vehicles with a forced induction system such as a turbo charger may be equipped with a boost gauge. This gauge displays how much pressure is building up in the intake manifold. The more boost, the more the turbo is working.
Because everything on the vehicle is computer controlled, including the instrument cluster, and because the vehicle shares so much information back and forth between all of the different computers on the network, some vehicles have customizable displays that can show many different types of gauges. Computers such as the engine control module receive all kinds of information from various sensors and inputs. This control unit also performs many calculations related to vehicle function. The computer that controls instrumentation can easily pull all of this info off of the network to display it for the driver. Even though most gauges have an analog needle that points to numbers or ranges on some kind of scale or dial, they are still digital gauges because the controls are digital.
Numbers and pointers mean things. The things that these gauges display are important. Every driver out there should be able to read and comprehend all of the gauges on the cars that they drive. Not only should the driver be able to read the gauges but they should also watch them constantly as they are driving. A simple part such as a $10 thermostat can destroy an engine by allowing it overheat. If the driver of the vehicle sees the temperature go up and takes action to prevent over heating, then all they have to pay for is a thermostat rather then pay for a new engine.