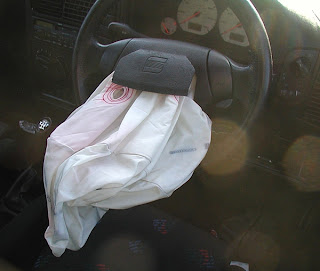 Devices known as seat belt pretensioners are also controlled by the airbag system. These devices are found in the shoulder strap retractors or in the seat belt buckles. They are there to tighten the seat belts against the occupants to more firmly restrain them in their seats. These pretensioners use a much smaller explosive charge to accomplish this task very quickly.
The SRS system is continuously monitored by the computer that controls everything. When there is a failure or break-down in the system that might cause the airbags to fail to deploy, the control unit will illuminate the airbag or SRS light. This alerts the driver that the system has a fault and ought to be checked out by a qualified technician. The technician will be able to interface with the SRS control unit and find out what the problem might be.
Cars are probably not as safe as they can be but they are much safer than what the used to be. Supplemental restraint systems are a large part of the reason for the increased safety. Despite the controversy, airbags have proven to be safe when they are used correctly. The future of auto safety is hard to predict. The devices of the future are likely just things that we haven’t thought of yet. Considering the downward trend of deaths from traffic accidents cars are likely to only get safer.
airbags safety