March 16, 2011
Numbers mean things, and so do letters. The digits that compose the vehicle identification number mean something as well, and some of the information that can be interpreted from the VIN is important to know, especially if you work around cars. Even if the automobile has nothing to do with your work day except for taking you to and from your place of employment, there are still a few things that are interesting about these seemingly uninteresting characters. The current format for the vehicle identification number dates back to 1980 when the National Highway Traffic Safety Administration mandated that a standard 17 digit format be used on all over the road motor vehicles sold in the U.S.
The VIN can be found in a number of different places. The first place where the VIN must always be displayed on any car or truck sold in the U.S. is at the base of the windshield on the driver side of the vehicle. In this position it should always be visible from outside of the vehicle, and it will be stamped onto a metal plate that is riveted to the dash. A barcode containing the VIN may also be visible alongside the alphanumeric representation of the VIN. The second most common place to find the VIN is on an information label on the driver door frame. On newer vehicles the VIN can be found on every body panel, as well as on the engine and transmission. This is a good way to tell if any of these parts have ever been replaced because if they have the VIN will be missing. This is a good thing to look for when examining a used car for possible purchase. 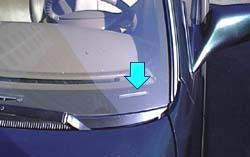 The first digit of the VIN says in which country the vehicle was built. BMW builds cars in the U.S. and Ford builds many of their cars in Mexico. Honda sells a few cars in the U.S. that were built in England, and Mitsubishis sells cars in the U.S. that were built in Australia. This first digit will tell you where the car came from. Many people buy “American” cars because they want to support the American worker. This is a noble cause but if the car that they think is domestic is built in Mexico, Canada, or soon to be China, then maybe they need to rethink their strategy. Conversely, some people only drive cars made in Germany because they think these are superior, but does it still count as a German made car if it was built in South Carolina, Alabama, or Mexico?
The second digit of the VIN represents the manufacturer of the vehicle. Sometimes this digit must be looked at in conjunction with the first digit but most of the time it stands on its own. Sometimes the name of the manufacturer displayed on the tailgate of the vehicle is not actually the one that built the vehicle. The Honda passport was not built by Honda and the Pontiac Vibe was not built by Pontiac.
The third digit can get confused with the second digit because it refers to the vehicle type or the manufacturing division within the larger parent company. For example Lexus is a division of Toyota, and Cadillac is a division of General Motors. This relationship may be displayed by the third digit of the VIN.
The fourth through eighth digit of the VIN relates to vehicle model and equipment. Various options that the vehicle might be equipped with are represented. If the vehicle is the four door version or the two door version, this is where the VIN will specify. The eighth digit is very important because this is the digit that states which engine option the vehicle is equipped with. The 2002 Ford Taurus comes with a 3.0 L V6, a 3.0 L V6, or a 3.0 L V6. They are all the same size engine and they are all V6’s. They are not the same engine by any stretch, so the way to tell the difference on paper, other than saying 3.0 L V6, is to use the eighth digit of the VIN. The engine would be designated as 3.0 L V6 (W), or 3.0 L V6 (T).
The ninth digit of the VIN is the check digit. Many different types of serial numbers, identification numbers, or even things like SKU numbers use a check digit. This is for electronic verification that the other digits of the VIN are accurate. A formula is used to determine what the check digit should be, and this formula may be universally used by any electronic VIN registry.
The tenth digit is very important because it designates the model year. On the driver’s door label, the date of manufacture is printed, but this is not the model year. Many people look at this label to determine model year, but this is inaccurate because manufacturing of the 2012 models begins in the spring or summer of 2011, and will go until sometime in the late winter or early summer of 2012. In 1980, when the 17 character VIN became the standard, the tenth digit was an A, 1981 was B, 1982 was C, and so on all the way through the alphabet, skipping O, Q, and U. When 2001 came along the letter Z was next, but it was decided to skip Z and go with a 1 instead. So then numbers were used starting with 1 for 2001, going up to 9 for 2009. In 2010 they stared all over again with A.
The 11th digit represents the assembly plant, and the last 6 digits are essentially the serial number. This serial number portion usually starts out as 000001 on the first car to roll off of the assembly line at the plant designated by the 11th digit. If two vehicles of the same year, make, and model are built in the same factory with the same options, the only place the VIN will vary is in these last 6 digits. The car that came off the assembly line sooner will have the lower number. When a manufacturer has a problem that leads to a recall because they got a bad batch of parts, and installed them on a whole string of cars, they may only issue the recall for all cars between number 002564 and 010500, which may be the only cars affected.

Many websites can be found that will completely decode any VIN that you punch into the computer. I don’t know who sponsors these websites, or if they are safe to use or not, but they do work, and the info they give you is accurate. One of these sites can be found at http://www.decodethis.com/
So these letters and numbers do mean things. Have a look at the Vehicle Identification Number on your car and see if you can learn a thing or two about your vehicle that you didn’t know before.