March 09, 2011
Here we go again. Is this going to be permanent or is it going to be temporary? Either way it’s going to be painful. The pain of which I speak is that pain in your wallet that you feel when you go to the gas station to fill up. Gas prices are not only high, but they are the highest they have ever been for this time of year, ever. Imagine what is going to happen this summer, which is the time of year when the price of a gallon of gas usually reaches its yearly high. Prices north of $4.00 a gallon are not only a certainty but the highest prices ever seen are very likely.
What are the alternatives to gasoline powered cars? Well, you could ride a bike, or walk… that will never happen. How about buying a hybrid? That might help somewhat but most likely it will mean getting a car that’s smaller than what you are used to, and any savings on fuel that might be realized on fuel purchase, might not be worth the extra cost of purchasing the car. Hybrids still run on gasoline so you can’t completely avoid the petrol station. Ethanol is a joke as a fuel (this is a subject for another article altogether), so it’s not worth discussing here. A purely electric car like the Nissan Leaf might be good but they are very expensive and are only good as a commuter because of a limited range. Most of these technologies are good for one reason or another but most of them are still not at the level where they can really begin to reduce our dependence on good old gasoline. So what else is there? 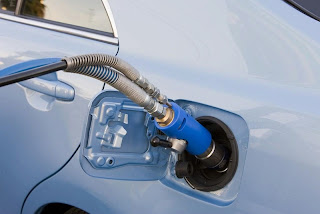 Compressed natural gas (CNG) is perhaps the best alternative to gasoline, and there are many facts out there that can support such a claim. First of all compressed natural gas is only stored in the compressed form, in order to increase the energy density of the fuel that is stored in a special tank on the vehicle. This helps to increase the range of the CNG powered vehicle. Typical pressure of the CNG fuel tank is between 1000 and 3600 psi.
Let’s look at the pros and cons.
Pros

One of the biggest things standing in the way of more bi-fueled and CNG vehicles on the road is the regulation of parts suppliers by the Environmental Protection Agency. If the average person in this country wants to covert their vehicle to run on CNG there are many obstacles, and most of them are very expensive to overcome. In order to make your conversion legal, the parts must be EPA certified. Very few kits are available that are EPA certified because the parts manufacturers have too much red tape to endure through the certification process. While some oversight is warranted, the process could use real streamlining.
CNG is unbeatable as an alternative fuel. This is not a permanent alternative because there will never be anything that will be permanent about our personal transportation. CNG can be the bridge between the gasoline of today and the batteries of tomorrow. When gasoline prices skyrocket, that’s when we will see some action.