February 25, 2011
One of the reasons that I became an automotive technician was because I spent a lot of time working on cars with my father when I was a kid. I associated hanging out with dad in the garage with having a good time, and fixing cars is what we did; therefore, fixing cars was also a good time. Knowing the things that I know now about working on these silly machines, it makes me smile to think back on some of the things that my dad used to do out in the garage, not for any enjoyment on his part, but because he was usually too cheap to take it to a shop.
My father has a mind for mechanical things so he was always able to figure out what needed to be done to fix the car, and then he was able to nearly always figure out how to actually perform the repair. As a kid I thought he was amazing because he could fix anything. Looking back now I think he was amazing because he took the time and put forth the effort to bust his knuckles on some old piece of junk, so that he could save some money to spend on his kids. He also saved a lot of money over the years by only driving vehicles that required little or no monthly payment. 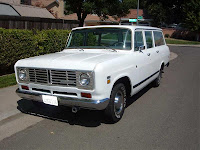 This meant that we had some terrible cars over the years, not all of them were completely awful at the time, but thinking back on them now there is not a single one of them that I would own, with the exception of maybe the old International Travelall 4X4. I don’t know for sure, but it was probably about a 1973. That thing was and maybe still is a beast worth having around. One of the vehicles he put his wife and kids into, that was a nice ride at the time, was an ‘85 Pontiac Parisienne station wagon. This was a nice ride but was cursed with the nasty old 5.7 L Oldsmobile diesel. The only thing good about that engine was the fuel economy. That motor was gutless, unreliable, and left us stranded in the mall parking lot more than once, because it wouldn’t start at temperatures below 50°. Lucky for us one day the engine came undone while my mom was driving around town on some errands.

Another thing that my dad liked to do was buy cars cheap for the purpose of fixing them up to resale them. I don’t know that he ever made much money doing this but my dad never made a lot of money doing anything. The thing that made him a solid bread winner was his persistence, combined with his frugality. Some of these cars were actually pretty decent cars, and were usually nicer than whatever he was driving or my mom was driving. I think there was more than once that he wished he could have kept one or two of them for the family. A few times he would actually register the car in his name and begin driving it legally (many times he would drive these cars around without license plates while fixing them up) as his daily driver only to succumb to the call of the money that the car would fetch from a sales listing in the classifieds. After that he was back to driving whatever old thing he could pick up for a few hundred dollars.
Some of the projects I remember that bring a smile to my face when I reflect upon them are things like the clutch job on the old ’66 Chevy pickup that he used to have. This is the truck that wouldn’t shut off when you turned the key switch off, it would stay running until you turned off the radio. That truck is one that on second thought goes into the category with the Travelall I mentioned previously. The task was simply to replace the clutch disc and pressure plate. I remember he had to heat up the bolts with a torch that held the cover on the inside of the cab around the shifter. He pulled one of the hot bolts out and set it on the Indian blanket seat cover, melting a hole in the cover shaped like the head of a bolt. He used to talk about how nice the rubber floor covering was in that truck but he ended up ripping it in a few spots during that job. This truck is also the one that he used, to teach me how ignition points work. If you don’t know what points are then ask someone who is very old.
One of the projects that makes me almost laugh out loud still to this day, was when he replaced the cam shaft in a then not too old, 1981 Chevy Citation. This is funny because he did it with almost no tools. He pulled the engine out with a come-along hung from the rafters of the garage. His hand tool selection consisted of a few 3/8 inch drive and 1/4 inch drive sockets, 3/8 ratchet (likely no 1/4 inch ratchet just the sockets with an adapter), some combination wrenches, a Phillips screwdriver, a flat screwdriver/mini pry bar, and a curved claw hammer. Many times that ratchet handle was met with the head of the hammer. With enough room to swing it, the hammer could make that poor little ratchet undo all sorts of tight bolts. I have no doubt that my father knew that this was not the ideal way to work on a car but had he spent the money to buy proper tools one of us kids might not have gotten some nice gifts that year for Christmas. Being a young kid and watching my dad work this way, I figured he knew exactly what he was doing.
One more memory of my father and his cars was from years much later, when I was a teenager. He had an old (there’s that word again referring to one of my father’s cars) Volkswagen Rabbit with a diesel that had to be push started on cold mornings. He would leave for work in this car about the same time I would leave for school. He had purchased my grandpa’s ’78 GMC pickup and had essentially given it to me to drive to school everyday and then to work in the afternoons. The truck was so much more reliable and better to drive but he let me have it. The thing I had to do each morning with the truck was push him down the street fast enough so that when he popped the clutch on the Rabbit, that little diesel would generate enough heat to get itself going. Once he was running he would head one direction and I would head another. One time he popped the clutch too early while he was still in contact with the front of the truck. The little rabbit bucked and pitched a few times and the bumper of the truck hit the tailgate of the rabbit. He just shrugged it off, didn’t worry about the body damage to his car, and told me to push him one more time. 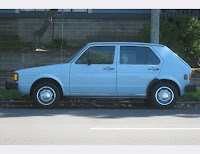 These stories might be funny to me now but the thing that I really think of when I remember these times is that the things he did, he did for his family. Transportation was just that, he cared nothing about social status. Cheap transportation meant weekly repairs. If he got a bit of personal enjoyment out of fixing a car with his own two hands then that was okay too. The thing that he taught me while we were working on cars together was not how to replace a spark plug, but how to take care of a family. He has nicer cars now but there are still some stories associated with those that show he is still the same guy that he has always been. Thank goodness for that.
Past Vehicles